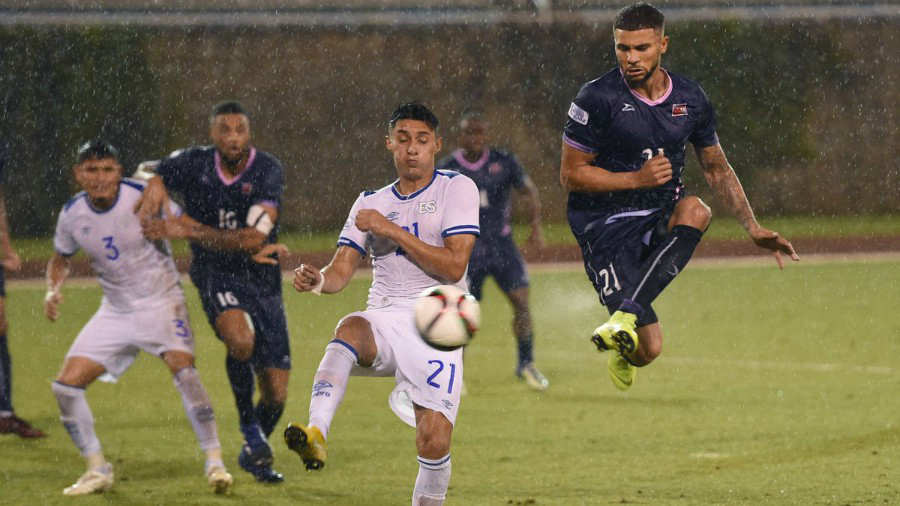 Wells, appearing for the national side for the first time in 3½ years, marked his return in the perfect fashion, rising highest to head home Reggie Lambe’s inch-perfect cross in the 70th minute, sparking wild celebrations from the Bermuda bench and fans alike inside the National Stadium.

The home side then held firm against late pressure from El Salvador, as the islanders claimed a vital three points, and memorable win, against an opposition ranked 70th in the Fifa rankings, 110 places above Bermuda.

Having lost their opener against Aruba before beating Sint Maarten, Kyle Lightbourne’s side knew they had to cause an upset and beat El Salvador if they were to stand any chance of advancing to the Gold Cup — a biennial championship for teams in North, Central American, and the Caribbean region, which will be held in the United States next year.

Any Bermudian nerves were not helped in the early stages as El Salvador settled into the match the quickest and created the first opening after just three minutes. However, after being released into the right-hand side of the area, Denis Pineda could not capitalise, firing a low tame effort straight at goalkeeper Dale Eve.

Bermuda responded immediately at the other end, as Wells raced onto a through ball from Lambe, only to find the onrushing Henry Hernández out quickly to smother the ball at his feet and snuff out the chance.

In what proved a frenetic opening five minutes amid the adverse weather conditions inside the stadium, El Salvador again went close as Gerson Mayen sent his diving header agonisingly past Eve’s left post after a dangerous cross from the marauding Jonathan Jiménez on the left-hand side.

After a quiet 15-minute period, where the sides cancelled each other out, Bermuda were dealt a blow as Calon Minors was forced off with an injury, to be replaced by Donte Brangman in the 20th minute.

Despite the disruption, the home side quickly regained their rhythm with Wells going close twice in quick succession after 23 minutes.

Latching on to a Willie Clemons through ball, the Queens Park Rangers man was only denied by a superb last-ditch Alexander Mendoza sliding tackle, before Wells tried to wriggle his way through the El Salvador defence, only for Mendoza to again snuff out the danger.

As the half wore on El Salvador began to dictate proceedings and create further opportunities of their own. Bryan Tamacas saw his drilled effort from the edge of the box well blocked by Jaylon Bather, before Jamie Alas failed to capitalise on Daren Usher’s poor defensive header, lashing over a fierce strike from an acute angle.

The pressure continued late into the first chance with El Salvador causing problems down Bermuda’s right-hand side. Alas once again found space on the wing but his dangerous drilled low cross was brilliantly defended at the back post by Brangman as the home side kept their clean sheet intact heading into the interval.

That momentum continued after the restart with substitute Andrés Flores volleying wide from a deep Jiménez cross in the 50th minute before the lively Mayen watched his effort cannon back off the cross bar moments later, only to look over and see the assistant’s flag raised for offside, much to Bermuda’s relief.

At the other end, Wells flashed two long range efforts wide of Hernández’s goal, before El Salvador’s Pineda squandered two huge opportunities in quick succession. The first, in the 64th minute, saw the midfielder go clear of Bermuda’s static backline only for his poor touch to dash any possible chance, before the same player found space on the left-hand side of the area, only this time to see the tall-standing Eve make a crucial save.

The visiting side were made to rue their wastefulness in front of goal as despite all of their pressure, it was Bermuda who broke the deadlock in the 70th minute.

Finding space on the left-hand side, Lambe was afforded the time to lift his head and perfectly pick out Wells in the area, who rose under little pressure to deftly glance his header beyond the outstretched reach of Hernández and into the bottom right corner of the net.

Just three minutes later Pineda spurned another glaring opportunity to level, firing into the side netting after following up Flores’s parried shot, before the home side found themselves equally as guilty, wasting the chance to wrap up the match-up with ten minutes remaining.

Wells proved the main culprit, shooting tamely at Hernández with a left foot effort inside the area, before seeing his rebound also blocked by the goalkeeper with Lambe better placed, in space, to his right.

They were almost punished with just three minutes remaining, as only a last ditch challenge from the impressive Bather, following a scramble inside the area, denied Tamacas a late leveller.

With the clock running down, the tenacious Clemons created two further chances for himself, testing Hernández after beating three defenders, before seeing a tame effort from the edge of the area easily saved by the El Salvador custodian.

Bermudian nerves were again put to the test as the fourth official indicated a minimum of four additional minutes.

However, the outstanding Danté Leverock once again named captain despite an administrative error naming Lambe as captain in the days leading up to the match — marshalled his players through the final moments of the game.

The referee’s final whistle sparked joyous celebrations, on and off the pitch, as Bermuda were left to cherish a memorable victory.

The result leaves the islanders level on points with El Salvador in Concacaf Nations League qualifying standings with a trip to the Dominican Republic next for Lightbourne’s men in March next year in their continued quest to seal a first appearance at the Gold Cup.

Carlos de los Cobos, the El Salvador coach, was left ruing his side’s missed chances but heaped praise on Bermuda, saying they looked like a different team from their previous matches.

De los Cobos prepared for his team’s Concacaf Nations League qualifier by analysing Bermuda’s previous outings against Aruba and Sint Maarten and said he knew they carried an attacking threat. He was, however, surprised by Bermuda’s fighting spirit and defensive resilience during their 1-0 win.

“I have to congratulate Bermuda because they played well and fought all of the time,” De los Cobos said. “They have some very good players. I saw Bermuda in their last two matches [a 3-1 defeat away to Aruba and a 12-0 win at home to Sint Maarten] and they looked very different tonight.”

Both teams improved after a difficult first half in which neither were able to get to grips with the torrential rain and windy conditions at the National Stadium. It was the visiting side who created the better chances after the break, with substitute Andrés Flores firing wide before Gerson Mayen hit the crossbar after being ruled offside.

The Central Americans continued to threaten the Bermuda defence, superbly marshalled by captain Danté Leverock, and on the few occasions they managed to breach the backline, goalkeeper Dale Eve was there to deny them.

Denis Pineda squandered his side’s best opportunity after a sloppy pass from Donte Brangman gave him a free run on goal. The outrushing Eve reacted quickly to thwart the danger by blocking Pineda’s effort with his legs.

“We could have had a better result as we had the chances to score,” De los Cobos said. “We played better in the second half but we didn’t take our chances ... this is football.”

De los Cobos added: “It was a difficult game for both teams because of the wind and rain. “In the first half neither team had time to adapt to the weather, but the second half was better for the fans as they saw a good game.”

Losing to Bermuda has seriously derailed El Salvador’s hopes of advancing to the Gold Cup next year as one of the top ten teams from the Nations League. They have the same points as Bermuda, having beaten Monserrat 2-1 and Barbados 3-0, but face Caribbean powerhouse Jamaica at home in their final qualifier.

“We need to win at home against Jamaica,” De los Cobos said. “It’s a very difficult game, but I have confidence in my team.” 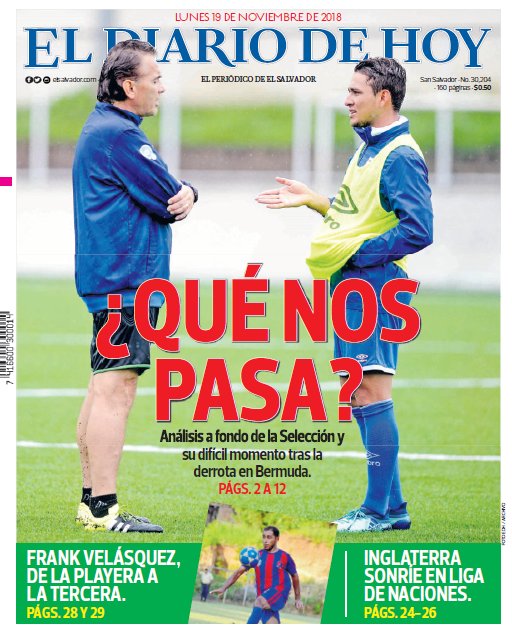